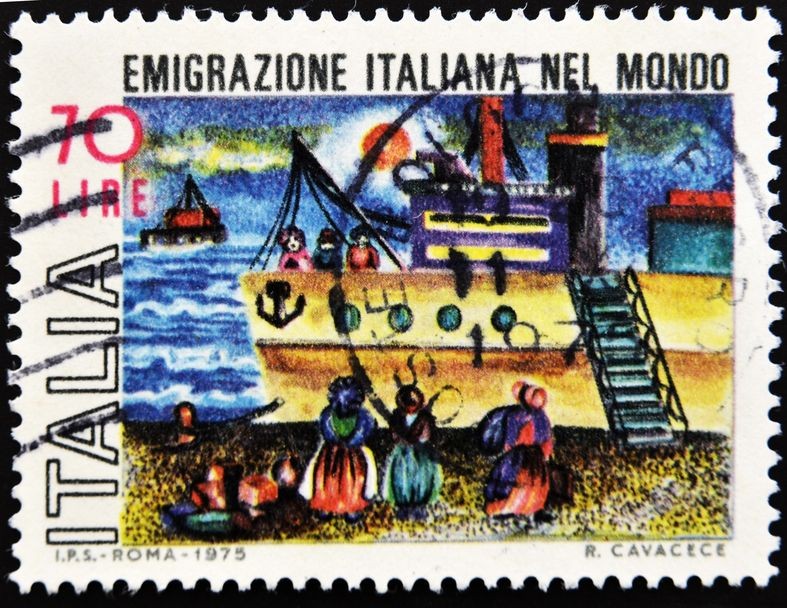 The greatest exodus of modern history has been that of the Italians. Since 1861, more than twenty-four million departures have been recorded. In the space of just over a century a number almost equivalent to the amount of the population at the time of the unification of Italy emigrated abroad.

It was an exodus that affected all the Italian regions. Between 1876 and 1900 the exodus mainly interested the northern regions, in particular way Veneto, Friuli Venezia Giulia and Piedmont.

In the following two decades the migration record passed to the southern regions; almost three million people emigrated from Calabria, Campania and Sicily.

Many ships carried millions of people on their travels in search of fortune on new continents. People who, in order to embark, sold what little they had with the hope of making a fortune abroad.

The small Italian shipping fleets after 1870 were encouraged with subsidies from the Government of the Kingdom of Italy.

The reasons that pushed masses of millions, especially from South Italy, to emigrate were many.

During the Piedmontese invasion in 1860 of the Kingdom of the Two Sicilies (carried out without a declaration of war), the machinery of the southern factories was brought to the North where the industries of Piedmont, Lombardy and Liguria were later built.

The populations of southern Italy, devastated by the war with about a million deaths, by natural cataclysms, oppressed by taxes, bled to death by power still of feudal style, had no alternative but to migrate en masse. The feudal system, still perfectly efficient, allowed hereditary land ownership to determine the political and economic power, the social status of each individual. In this way, the poor classes had virtually no chance of improving their condition. 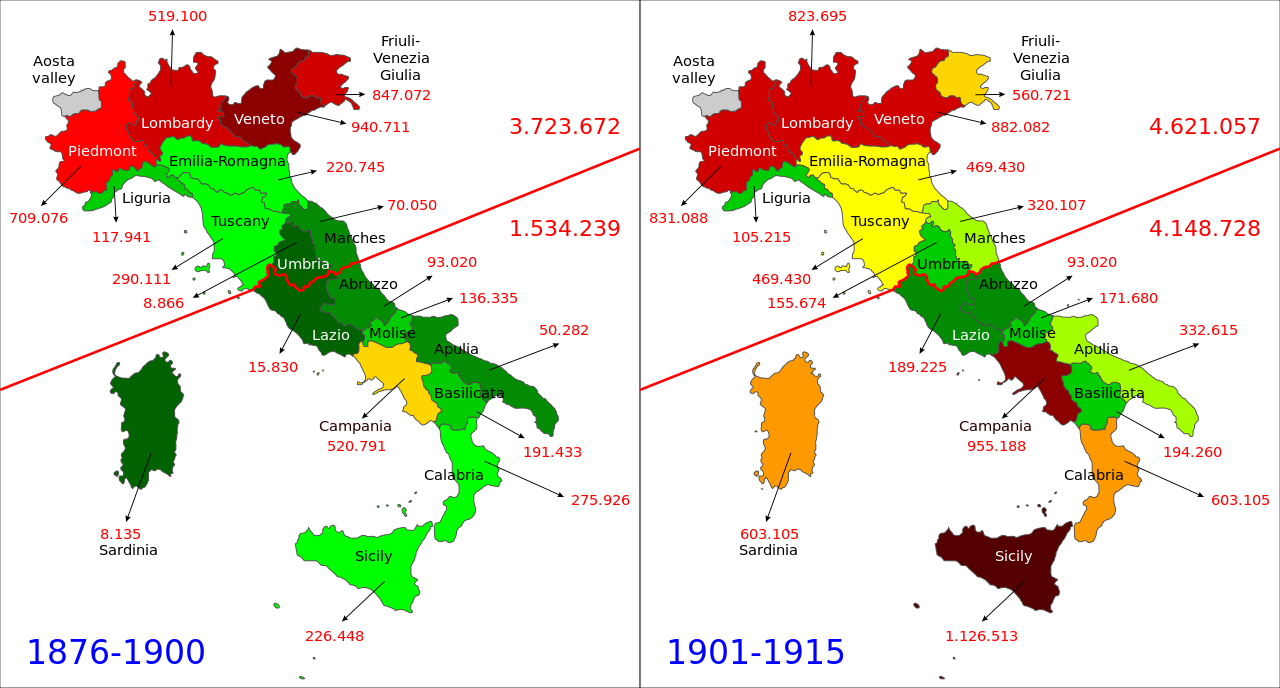 Around 1880 there was an annual average of about 109,000 emigrants; in 1900 they rose to about 310,000; in 1913 there were even 873,000. Emigration resumed after the First World War, reaching 615,000 units in 1920 and always remained high until 1927, when the fascist regime closed the migratory flow.In total, between 1876 and 1925, more than 9 million Italians left Europe, and almost as many were seasonal emigrants and those who left the peninsula even though they remained on the continent.
The United States above all, but also Argentina and Brazil, were the main destination countries of Italian emigrants.

The United States since 1880 opened the doors to immigration in the midst of the start of their capitalist development; ships brought goods to Europe and returned with emigrants. The costs of ships for America were lower than those of trains for Northern Europe, so millions of people chose to cross the ocean.
Between 1880 and 1915 four million Italians landed in the United States, out of about 9 million emigrants who chose to cross the Ocean towards the Americas. About seventy percent came from the South of Italy.
The arrival in America was characterized by the trauma of harsh medical and administrative checks, especially at Ellis Island, the Isle of Tears. In the Museum of Emigration in New York there are still suitcases full of poor clothing of the people who arrived from Italy.

In the United States, which increased the value of industrial production between 1850 and 1900, most of the Italians who landed with an average of eight dollars in their pockets were useful and functional to those very high rates of economic growth. The unskilled workers who expatriated from southern Italy contributed to the construction of the railways and the great North American roads; they worked and often died also in the mines, settling for average daily wages that did not reach two dollars.

The emigrants, in the vast majority, were poor and illiterate peasants and laborers who fled from their towns and cities because of unemployment and hunger. Emigration was viewed favorably by the Italian Government, which however did nothing to assist and protect the emigrants. The favorable attitude of the Italian political class stemmed from the assumption that the money sent to Italy by the emigrants would have served to confront and solve the age-old problems of the South and of the other depressed areas of the peninsula.

Since 1931 there was an important arrest of emigration due first of all to the United States of America, which limited the number of emigrants admitted and then also from the fascist government which halted emigration abroad in that period. During the second world war, the arrest of the migratory flow was even more conspicuous: this was due to the fact that Italian citizens residing in some foreign Countries were considered "enemies", since Italy was considered a political enemy to fight. The second wave of emigration occured immediately after the Second World War, between 1946 and 1971; emigration in this period resumed considerably, continuing to record the departure of entire generations of workers abroad.

Genealogy research Conditions in Italy
Which conditions may have an effect - positive or negative - on your Italian family history project. The following insights, based on many years of experience in Italy, pertain to factors that have very little to do with Italian genealogy per se, but involve vast cultural differences that influence ...
Subscribe for FREE Unsubscribe from our site