Just at one-hour distance from Milan you can find the small town of Cremona. As the capital city of the province of Lombardy, Cremona has around 72.000 inhabitants. The historic town is situated near the Po river in the middle of the Po valley (Pianura Padana) and has an long history, dating from 400 BC when Cremona is first mentioned in history as a settlement of the Cenomani, a Gallic tribe that arrived in the Po valley around 400 BC. Soon Cremono was overtaken by the Romans, that claimed the town as a colony in 218 BC. Under Roman supervision Cremona would grow into a major city in northern Italy. However around 40 BC, Augustus confiscated Cremona's land and gave it to his men. An economic downfall fell upon the city until it was destroyed in 69 AD.

Although it was rebuilt it wasn't mentioned in history until the 6th century. Now a military outpost of the Eastern Roman Empire, during the Gothic War. But again, it was destroyed, this time by the Lombard king Agilulf and its territory was divided between Brescia and Bergamo.

In 615 queen Theodelinda, who was a devout Roman Catholic, decided to have Cremona rebuilt, re-installing a bishop, with the intend on converting her people to Catholicism. Having the bishop in control of the city, Cremona became of importance to the Holy Roman Empire and subsequently regained power.

In the years that followed Cremona knew many struggles and fights, such as internal problems, foreign occupations and even the plague, but the city managed to expand and flourish time and time again. In 1301 troubadour Luchetto Gattilusio was podestà of Cremona and during that time the city managed to reach a population of up to 80.000 people. Which is larger than the current 72.000.

For those who want to pay a visit to Cremona and have an interest in architecture, there is much to see. Especially the Cathedral of Cremona with the annexed Baptistery has proven to be one of the most notable sites of Romanesque-Gothic art in northern Italy. 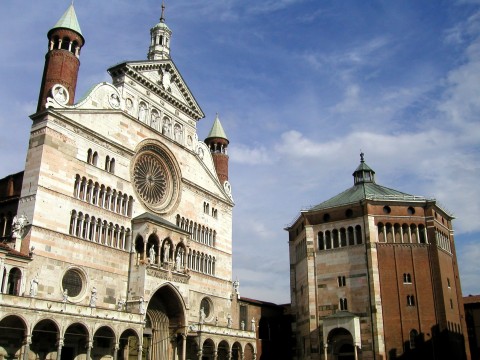 Not devoured of churches, Cremona holds many others to visit. Think of: Sant'Agata, Sant'Agostina, San Facio, San Girolamo, San Luca, San Marcellino, San Pietro al Po, Santa Rita, San Sigismondo and San Michele. From the latter it is said that it is built by the Lombard, who venerated the archangel St. Michael. But San Michele has been documented to exist from the 8th century, which is prior to Lombard rule of Cremona. During the centuries following its build, San Michele got a new basilica, as well as a new campanile. Also, the naves were vaulted with pointed arches. The church holds also a statue which shows 'St. Michael Subjugating the Beast'.

But next to the many churches Cremona holds, there are also quite some buildings that might spark an interest. Among them are: The Torrazzo (Tower), which is the third highest brickwork bell tower in Europe. Because the tower has no lift, a total of 502 steps must be taken to arrive at the top. There you will be treated to spectacular views. Inside there is a new 'vertical museum'. Opened in 2018 it is dedicated to astronomy, time measurement and clocks. It also includes a Foucault's pendulum exhibit. The tower was completed in 1309 but took over 80 years to be build. Its clock tells time, measures the phases of not only the moon, but also the seasons and gives also astrological information.

During World War II, Cremona had much to endure. The city lost many historical architectural elements, so there was room for buildings that reflected the (Fascists) period people lived in. Engineer Nino Mori was a point-man for the Fascist Party in Cremona. He put his mark on the city. Buildings such as the 'April 25th Commemorative Regime', the 'Guild House', today known as the Chamber of Commerce Building and the 'INPS Building' are part of what is called the 'Littorio Style'. Nino Mori's signature was on most public designs built in Cremora, but Cremona's rationalism is also found in architects such as Vito Rastelli (Villa Bassetti, Villa Martinelli, Pallzzina Maldotti, Palazzina Castelotti, Shrine to the Fascist Martyr, Leonida Bissolati Association of Rowers), Carlo Cocchia (Palace of Art – 1941) and Giovanni Muzio.

Next to its long history and diverse architecture, Cremona is mostly known for its amazing musical history and traditions. The birth of the first violin has been traced back to this Italian city. And although there has been a century long discussion between the cities of Brescia and Cremona who could claim the invention of the violin, it's only during the end of the twentieth century that research showed that credits should go to Andrea Amati.

Amati was born in 1505 in Cremona and became the first of many generations of violin builders in Cremona. Soon after his invention the violin started to become an important export product. Already in 1565, the French Court ordered as much as 24 instruments. Andrea Amati had to make these instrument for Charles IX. Amati taught his sons Antonio and Gerolamo how to build these instruments and subsequently the two boys added their expertise in order to get an even more sophisticated sound and construction. Eventually the violin became so popular, that the demand became too much. To solve this problem Gerolamo's son Niccolò Amati started to look for young, talented people that wanted to learn the trade of building a violin. One of Niccolò's students was Andrea Guarneri, who would start a new dynasty of violin builders. One of Andrea Guarneri's grandchildren, Giuseppe Guarneri, would, together with Antonio Stradivari - also a student of Niccolò Amati -, become Cremona's most important violin builders. They would give the city the tools to become the international center of violin builders, which, to date, it still is. However, although world's best-known violin builders find their origin in Cremona, such as the mentioned Amati, Guarneri and world-famous Stradivari, during the 18th century several important violin builders passed away with nobody to fill in the gap. Still keeping up with tradition, the city lacked any major violin builder and it was not until 1938 that it was actively decided to do something about this. An international violin builders' school was founded, seated in the 15th century Pallazzo Raimondi.

Nowadays, spread all over Cremona, you can find hundreds of violin builders. In their ateliers they keep up a tradition that is over centuries old. Just by stepping in one of those ateliers you can see that the craftsmanship has stayed the same as it once was hundreds of years ago. Modern violin builders are building their violins by using the same tools as being on display in the Museo del violino, as well as exhibiting the same precision and patience the great masters has once done before them.

Although the famous violin builders of long ago have put their mark on the city from a historic point of view as well as on the violin itself, the modern-day builders are looking for a way to put more emphasize on their violins. For that cause they have founded a consortium to get attention for the Cremona's violin. The consortium organizes many events in order to do so. From national and international courses, concerts, exhibitions, to congresses and festivals. It makes sure that the focus of the musical world, and especially that of the violin, stays on Cremona. A city with many hidden treasures, on which its musical tradition is only one.

Giovanni da Pian del Carpine
There are personalities who are unknown to most of us, but they have made an important contribution to our knowledge of the world around us. In fact, without their contribution, some news of the past would not have come down to us and we would not have a complete view of past cultures.One of these i...
Subscribe for FREE Unsubscribe from our site